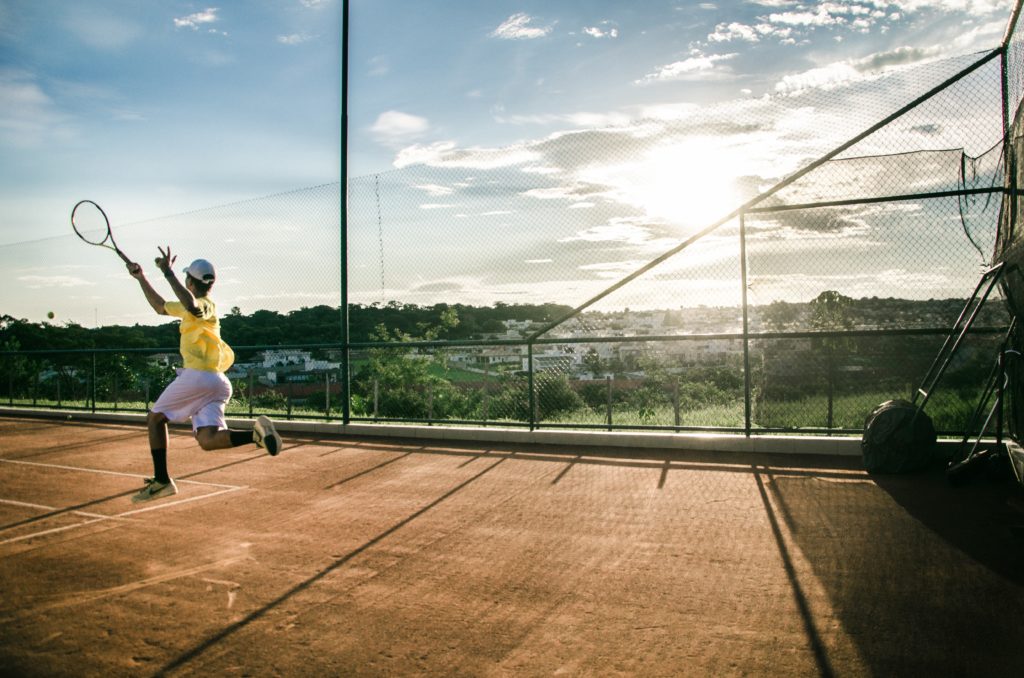 In tennis, a “winner”, is a shot that an athlete hits which doesn’t come back and is not touched by the opponent.

In this article we will look at how it is ineffective to focus on hitting winners in a match as the main way to win. We will hope to explain the importance of an accurate focus on the set up of the rally and execution of the shots which would lead up to the final hit of the ball. This final shot is a culmination of the set up to hit into the open court, the recognition of the right moment to execute, and hitting the shot with the right mentality.

Too often players focus on hitting winners to win points, games, sets, and matches. Hitting a winner feels good emotionally and produces a good result on the scoreboard however, many times errors increase as a player looks to win by putting the ball away too often. Hitting a winner is fun and mentally demoralizing to an opponent. For many players, there is nothing like hitting a clean winner to win a point, give a fist pump, and let out a good and loud, “come-on”!  Despite this positive feeling and rush of emotions, an athlete has to be careful on how much pressure they put on themselves to win points this way. As a player gets more and more focused on ending a point by hitting a winner, their footwork, shot selection, and mental focus typically deteriorate. The stress of winning a point by a final untouchable shot typically increases when the athlete starts to believe that they can only win one way. Many tennis players will live and die in a match by their focus on hitting winners to succeed.

So, how can an athlete hit more winners consistently?

The main idea here is that “Winning is not about the end result but is about the process of getting there. As stated above, for most players, a winner is thought of as putting the ball away on the last shot. Here we will focus on a healthier view of  winner. This definition would be “ending the point by a process of getting into position to hit a high percentage shot into the open court which is not returned.” The process of setting up to hit a winner is more important than hitting the final shot as many of the unforced errors that tennis players creates can be attributed to their lack of proper execution and proper continuation of the process that they took to get them into the position they are in. A winner is more than the final hit of the ball.

When players are standing behind the baseline in a long rally, sometimes impatience sets in and a player may try to force Winners and hit some shots that are not always good shots to take. Trying to hit a winner while standing behind the baseline most likely won’t work consistently. Trying to hit a winner while on the run, most likely wont’ work consistently. Thinking the only way to win a point is by hitting a winner is not a healthy way to approach a match. The point here is that hitting a winner is difficult. It is more likely that a player will create and unforced error when trying to hit a winner than actually succeed unless they are in the right position physically and mentally.

As a former collegiate coach I had the mentality to teach my players to hit a shot with a high percentage outcome. When a player found themselves standing inside the baseline and with their feet in a good position, I would coach them that they have the green light to “be aggressive” and “Go for it”. I wouldn’t tell them to hit a winner. I didn’t want to put this word in their head as there is always a small chance the opponent will get to the ball and hit it back. I also didn’t want them to think about ending the point as this would typically result in them hitting a shot with a physically stiff movement. Being aggressive and going for it was a mentality. Thinking this way didn’t involve ending the point, but hitting an aggressive shot, staying fluid, and keeping the pressure on the opponent. The longer period of time that consistent pressure is applied to an opponent, the more likely a point would be won.

So, how do we redefine a winner? A winner is not just one shot in a rally that wins a point. It is a culmination of a series of shots, a final shot that is hit from an aggressive position on the court, and hit with a fluid and confident mentality. A winner should also be thought of not as the only option to win a point but as a one of the options an athlete can utilize if they are in the right position on the court. (a further article will be written in regards to the most effective ways to win points). A final thought regarding winners, is that they need to be hit with a confident mind. Going for a winner can be a bit of a risk, having a confident mind will help an athlete make the right decision at the right time.

Winners are fun and emotionally exhilarating shots to hit. While they are fun, they are also a risk if not executed properly. An athlete has to know their ability, their mentality, and aware of the position they are in on the court to effectively and consistently hit winners.